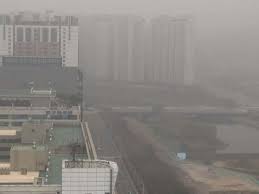 The rise in air pollution level has reduced average lifespan  of a child from South Asian region up to two and a half years, whereas, worldwide the reduction in lifespan stands at twenty months.

A global study named “State of Global Air 2019” published in the journal proceedings of the national Academy of Sciences (PNAS) revealed the data on April 3. The report is also published in Urban Update.

The study on “State of Global air 2019” published by Health Effects Institute (HEI) said that over 1.2 million deaths in India in 2017 were due to exposure to outdoor and indoor air pollution.

Globally, the air pollution was responsible for more number of deaths than many better known risk factors such as malnutrition, alcohol abuse and physical inactivity.

The report stated that in India air pollution is the third highest cause of death among al health risk. After smoking ,air pollution related diseases  contributes to more deaths globally each year than from road traffic injuries and malaria.

About India and China, the study found that both the countries together were responsible for more than half of the total global attributable deaths, with each country witnessing death toll over 1.2 million from all air pollution in 2017

As per the report the South Asian Countries Bangladesh. India, Nepal and Pakistan was rated as the world’s most polluted, accounted to more than 1.5 million deaths caused by ill effects of air pollution.